Analyzing the record early voting numbers seen across the U.S. reveals very bad news for Trump and the down ballot GOP candidates

Over 28 million Americans have already cast ballots in the 2020 election as of this morning, a record-shattering avalanche of early votes driven both by Democratic enthusiasm and a pandemic that has transformed the way the nation votes.

The 27.8 million ballots submitted as of yesterday represents nearly 22 percent of ALL the votes cast in the 2016 presidential election, even as eight states are not yet reporting their totals and voters still have more than two weeks remaining to cast ballots.

Americans’ rush to vote is leading election experts to predict that a record 150 million votes or more could be cast and turnout rates could be higher than in any presidential election since 1908.

“It’s crazy,” said Michael McDonald, a University of Florida political scientist who has long tracked voting for his site ElectProject.org. McDonald’s analysis shows roughly 10 times as many people have voted compared with this point in 2016.

“We can be certain this will be a high-turnout election,” McDonald said.

So far the turnout has been lopsided, with Democrats outvoting Republicans by a 2-1 ratio measured by an Associated Press count. Republicans have been bracing themselves for this early Democratic advantage for months, as they’ve watched President Donald Trump rail against mail-in ballots and raise unfounded worries about fraud. Polling, and now early voting, suggest the rhetoric has turned his party’s rank and file away from a method of voting that, traditionally, they dominated in the weeks before election day.

The early voters also tend to trend older. Voters 50 or older make up more than 70% of the votes cast, according to a TargetSmart analysis. Hundreds of thousands more young people have voted at this point in October, compared with the 2016 election and Black voters are making up a larger share of early voters than they did in 2016.

More than six times as many Black voters have voted early this year than had at the same point in the last presidential election, according to TargetSmart.

With Black voters overwhelmingly supporting Biden over Trump by a greater than 4:1 margin in national polls, this surge in likely Democratic votes in states like Georgia, North Carolina, Florida, Michigan, Ohio, Texas and Pennsylvania could potentially be key to give Biden and down ballot Blue candidates a tactical advantage in the final stretch of the campaign.

In these critical battleground states, Democrats will be able to “bank” a significant percentage of their voters, allowing them to pivot and focus their time and money toward harder-to-find, infrequent voters. With the majority of Democrats all down the ballot now holding a large cash on hand advantage at this point in the campaign cycle, we’ll likely see that reflected in television and digital ad buys in these last 2 weeks before November 3.

The enthusiasm of Democratic voters was widely evident at several polling places where long lines have been recorded, with some waiting up to 11 hours to vote early. Some have grown impatient and left before being able to record their vote but most do stay in line until they are able to cast their votes, voicing frustration with the Trump administration as well as their local and state GOP representatives as reasons they were willing to wait so long to vote.

One voter commented, “I made the decision to sit out the 2016 election, believing it wouldn’t make any difference” before adding that they “would never make that mistake ever again…”

Officials and technical glitches cause long lines and long waits

As early voting began in states like Georgia and Texas last week, long lines quickly formed at some polling places, with some voters waiting in line for many hours before casting a ballot.

Computer issues played a big role in those delays, according to officials but some voters in Texas are blaming Governor Abbott with his order to limit counties to only one ballot drop-off location, no matter how large the county. Brewster County – the largest county by area in the state – covers over three times the size of the entire state of Delaware.

Last Thursday, a Texas state court ordered a halt to Governor Greg Abbott’s October 1 order limiting counties to only one ballot drop-off location, but an appeal has been filed so that will still prevent counties from adding more ballot drop-off boxes for the time being.

In Georgia, Republican Secretary of State Brad Raffensperger said the registration database used to check people in for early voting was bogged down by the high amount of traffic.

“If you look at the amount of information that’s just flowing, it’s like everyone jumping on I-285 in the morning, and sometimes you have to stagger out the rush hour,” he said on Wednesday, according to Georgia Public Broadcasting’s Stephen Fowler. “Our vendors have been working on that, along with our staff, to make sure we’re looking at some other optimizations, and we should have that probably done by the end of this week.”

In Fort Bend County, Texas, a check-in machine glitch shut down at least four precincts there.

“I, quite frankly, think it’s a form of voter suppression,” a voter named Renee told Houston Public Media’s Elizabeth Trovall, after waiting in line to vote for nearly four hours. “There’s no way there should be a glitch on the first day of early voting. No way. … I’ve just never seen anything like this ever.”

Election officials and experts have warned all summer that some in-person voting locations would probably be plagued by longer lines this fall, as jurisdictions have had to consolidate polling places and recruit more poll workers.

But lines have been the exception across the country overall, not the rule. And there’s also optimism that precincts that have struggled with lines will start to see them ease as early voting continues.

Gwinnett County, Ga., for instance, was reporting lengthy waits this past week at a number of precincts, but by Friday afternoon, the county’s online wait tracker showed no wait longer than 90 minutes.

“Many people are passionate about participating in this election,” said Perez. “And so it’s appropriate that there’s a lot of bottled-up demand for people to get there right away and get their vote in. The volumes you’re seeing on the very first day of early voting will probably taper off some, later in the period.”

States have rapidly scaled up their vote-by-mail efforts to serve the 40% of voters who now say they plan to vote that way.

But with an increase in voting by mail, also comes a corresponding increase in handling and administrative errors. Reports are cropping up seemingly daily of another batch of ballots that went out to voters with some sort of mistake.

“With a little under three weeks to go, it’s imperative that we ensure that our elections system is one that voters can trust,” said Allegheny County elections manager Dave Voye on Wednesday, as WESA’s Lucy Perkins reported. “This was a failure on behalf of our contractor and impacts too many of our voters.”

The county added a search function on its website so voters can check whether they were among those affected, and it will also send all the voters new ballots.

Stroman, the former deputy postmaster general who is now a senior fellow at the Democracy Fund, said it’s important to remember that in all these instances, officials caught their errors with enough time to fix them. Officials also have safeguards in place to make sure no one votes twice.

“I think, to this point, what we’re seeing are pretty much the normal mistakes, exacerbated by a global pandemic,” Stroman said.

Trump has sought to use these sorts of problems as evidence that the entire system of voting by mail is flawed or fraudulent in some way.

But these sorts of issues happen every election, says Kathleen Hale, an election administration expert at Auburn University, and they aren’t the sign of anything nefarious or broken.

True. Swine flu only killed 12,500 in USA over 12 months. The #TrumpVirus has killed close to 20 times that many in less than 9 months, will hit at least 300K. #Trump has the best pandemics! #Election2020 #ElectionDay #VOTE

Joe Biden FAILED BADLY with the Swine Flu Epidemic. He knows nothing. All talk and no action! 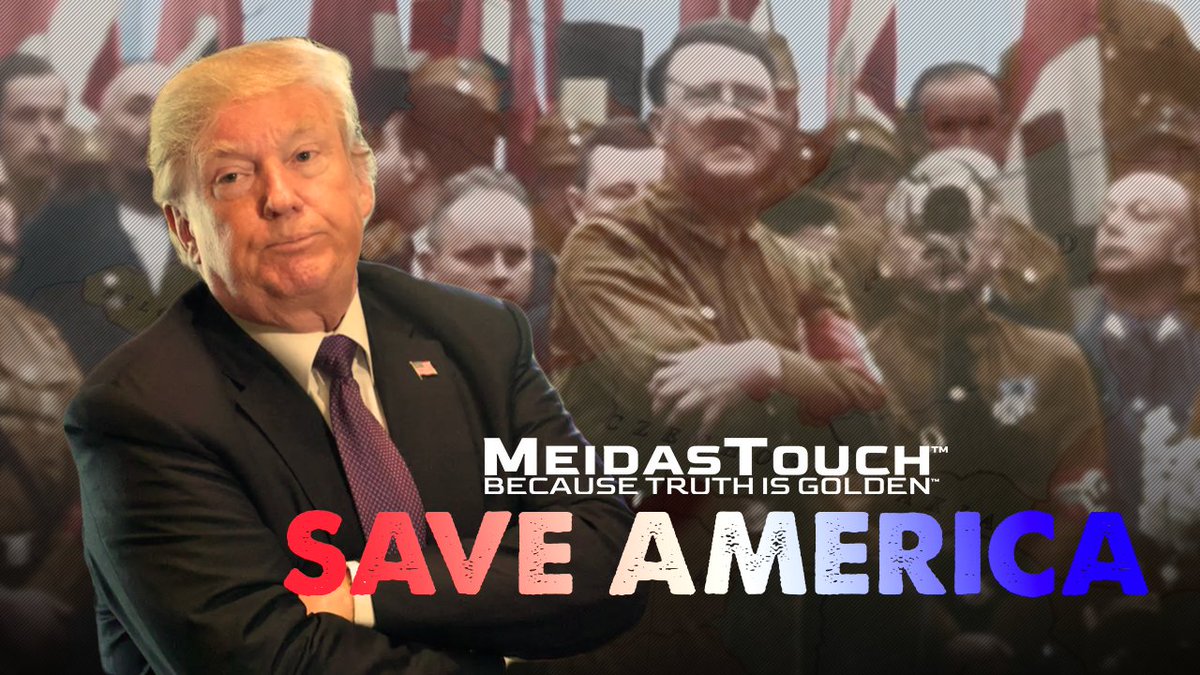 He promised to be the voice of the common people.He’s made his rich friends richer,increased the political power of big corporations & the wealthy. He harmed working Americans, all while the #TrumpVIrus is killing 225K Americans. #FlushTheTurdNov3rd #VoteLikeYourLifeDependsOnIt

With his “super spreader” campaign events, Trump is ignoring his own administration’s COVID guidelines, intentionally infecting and killing more Americans. Today, the COVID death count is 227,000. Tomorrow will be higher. And he claims he’s pro-life?! #TrumpVirus #ProLife 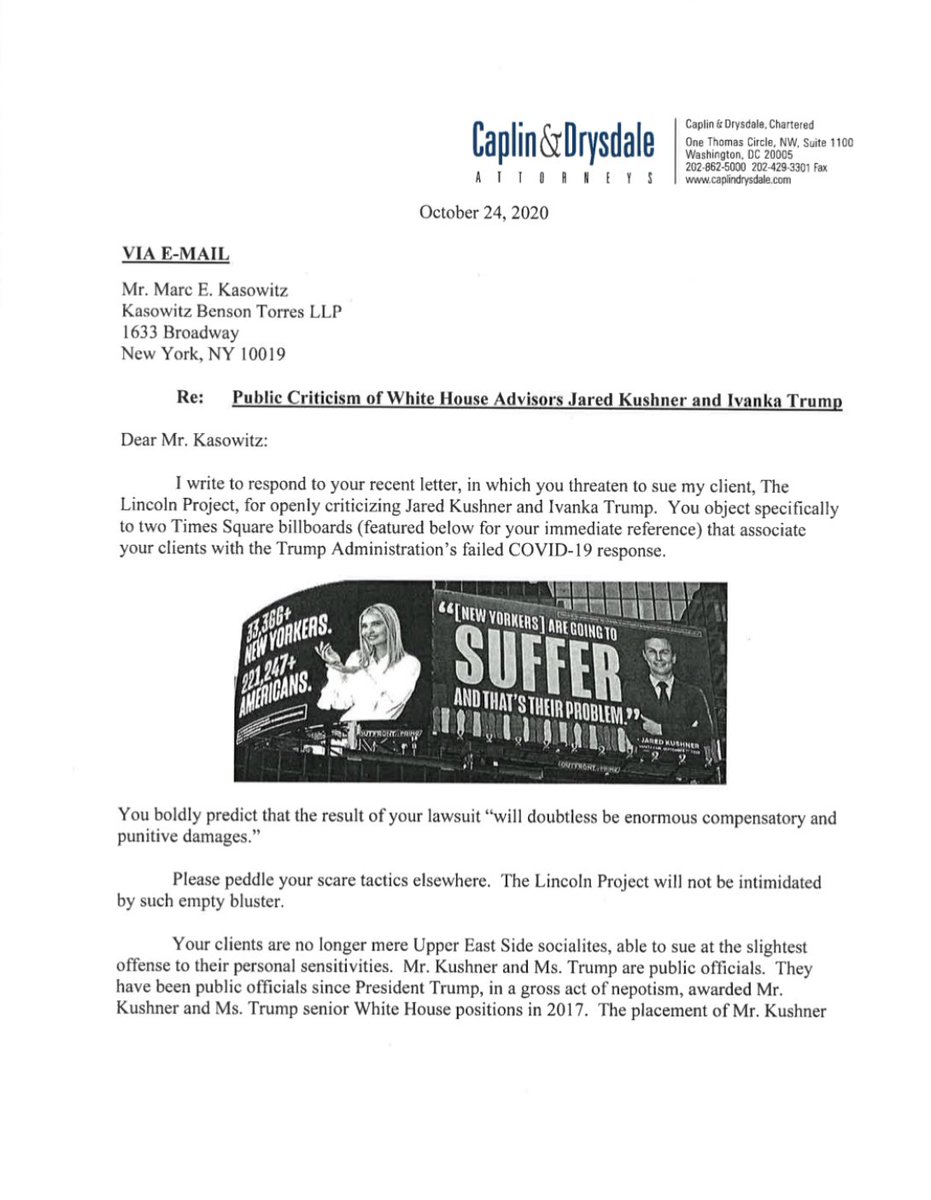 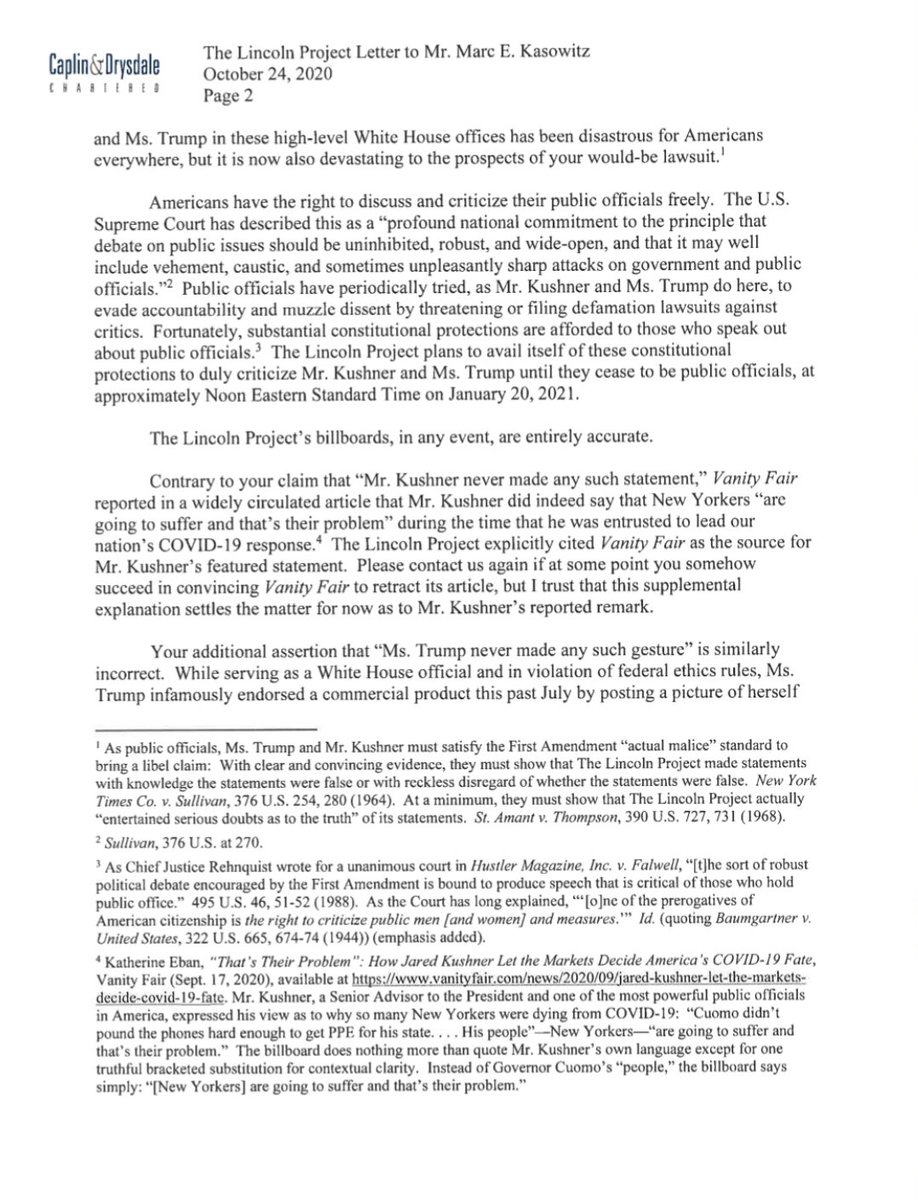 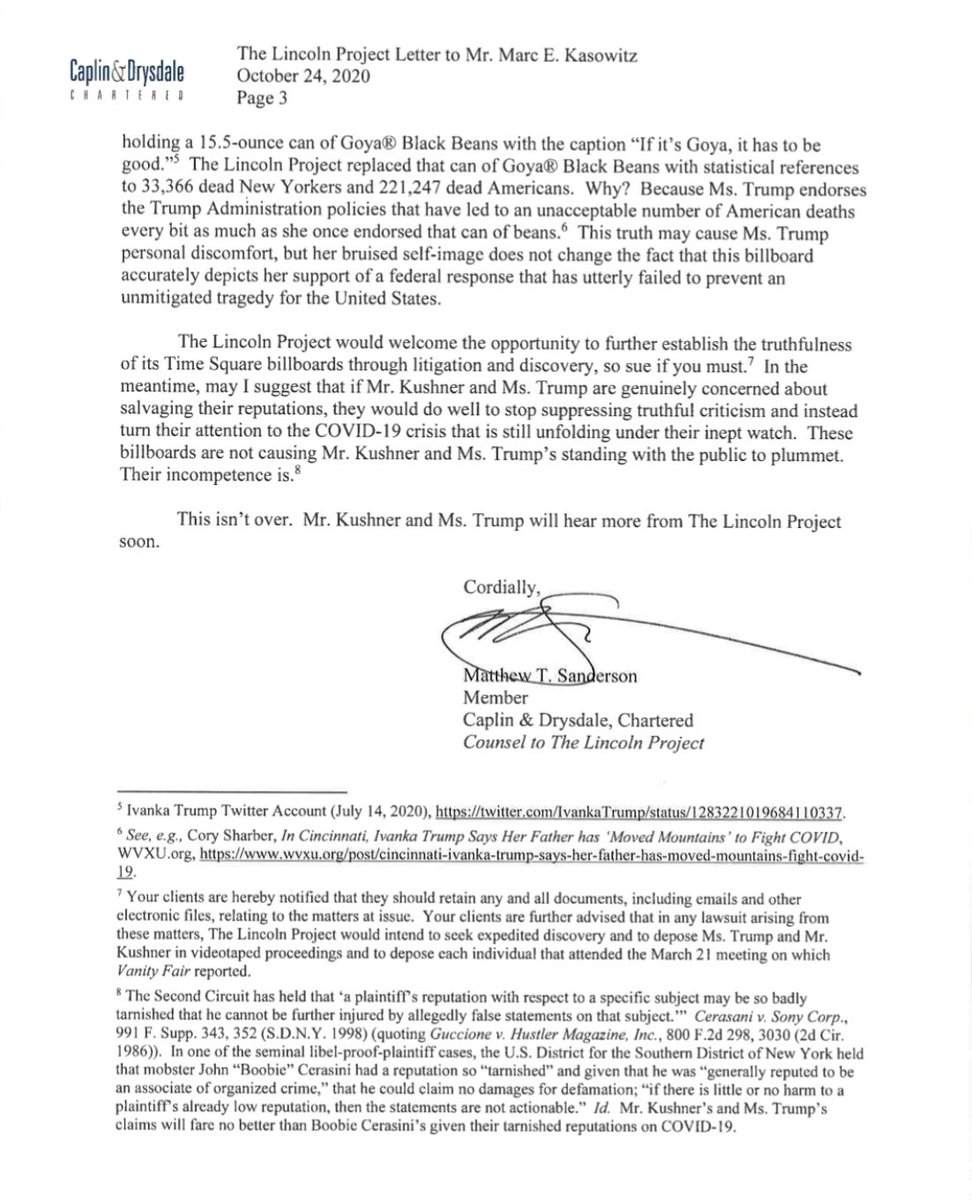 The Lincoln Project’s legal response to the frivolous threat of a lawsuit from Jared Kushner and Ivanka Trump’s lawyer.

This will not be the last they hear from us.

BREAKING: *11* Trump rallies were followed by a surge in COVID cases.
https://t.co/01DJu1D7QC 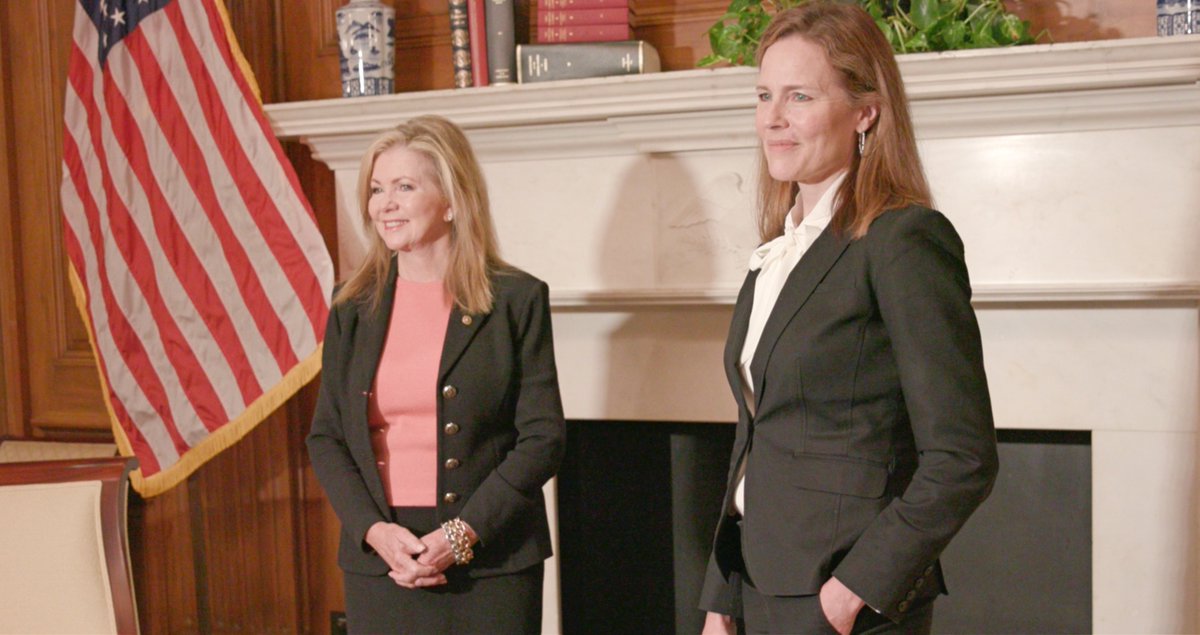 Not even 24 hrs have passed since SCOTUS swear in-
Yet, we hear Kavanagh saying NO ELECTION CALLs should be made on NOV 3rd!!!
& we were taught they were the "non partisan" branch of govt!
Omg!
#TrumpVirus
#COVID19
#TrumpIsCompromised
#TrumpDeathToll230K

... he is simply a slovenly, abrasive, showboating failure.

... why isn’t he working on curing the #TrumpVirus?

... why isn’t he working to end the #TrumpEcononicSlump?

... why would any sane American vote for this fool. 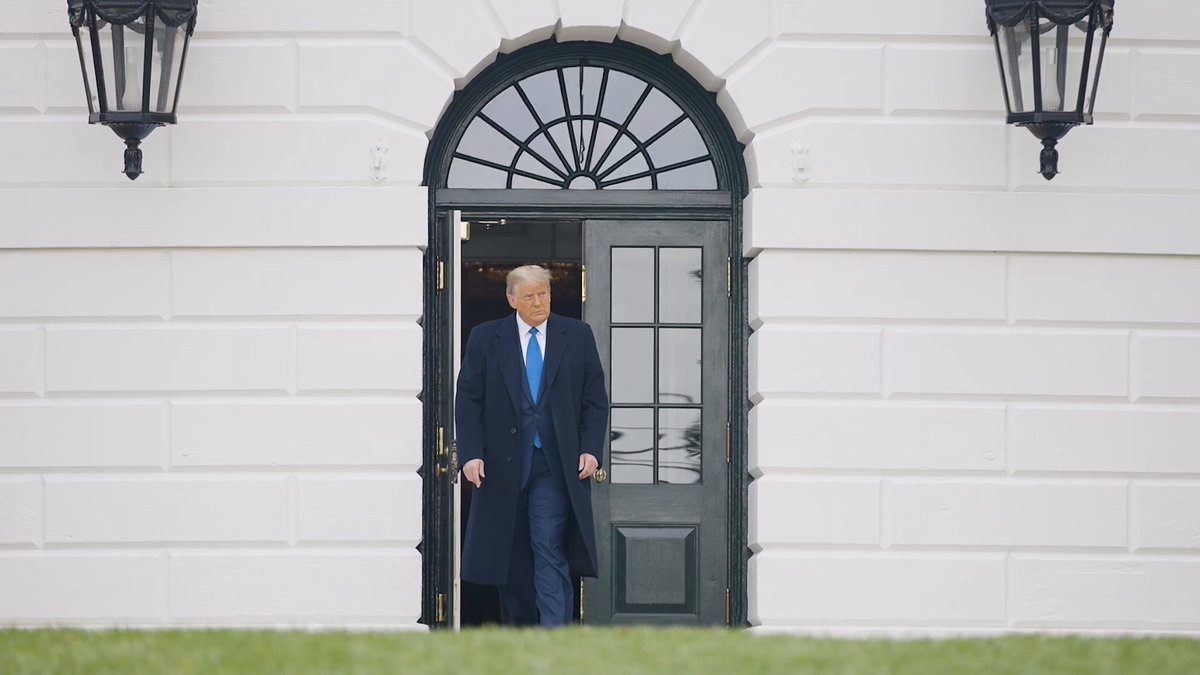 President @realDonaldTrump is on his way to Michigan, Wisconsin, and Nebraska! 🇺🇸 🇺🇸 🇺🇸