An analysis that just came out from from Morgan Stanley that mirrored one by the Fed’s Neel Kashkaria was akin to a huge wrecking ball swung into Donald Trump’s reelection campaign hopes, predicting a series of rolling coronavirus lockdowns stretching well into 2021, or even longer until a vaccine is found.

Upon hearing of the report, Wall Street did not react favorably.

America will remain in a state of rolling lockdowns for the next 18 months, according to analysis from Morgan Stanley and the Fed’s Neel Kashkaria. This brutal dose of reality hit the stock market hard. The Dow Jones Industrial Average (DJIA) fell more than 200 points on Easter Monday.

Although New York continues to flatten the curve in terms of coronavirus numbers, talks of re-opening the economy have fallen flat. Morgan Stanley’s biotech analyst Matthew Harrison said on-off lockdowns would likely remain in place until 2021.

Recovering from this acute period in the outbreak is just the beginning and not the end. We believe the path to re-opening the economy is going to be long. It will require turning on and off various forms of social distancing and will only come to an end when vaccines are available, in the spring of 2021 at the earliest.

The Morgan Stanley note hit Wall Street with a sobering dose of reality. The bank’s economists now estimate that economic activity won’t return to normal until then end of 2021.

This view on the delayed peak and slow return to work has led our US economists to revise their US forecast to a return to pre-Covid-19 levels not until 4Q21.

The Dow Jones turned negative on Monday after last week’s historic relief rally. As of 9:35 am ET, the DJIA had lost 202.42 points or 0.85% to slide to 23,516.95. After a strong bounce off the March 23rd bottom, some analysts now see a secondary bubble inflating in the stock market.

Harrison’s note starts positively, suggesting that coastal regions of America will hit a peak in the next few days, driven by numbers out of New York.

This would put an initial US re-opening on track for mid-to-late May at the earliest.

But this is just a tentative first step. Re-opening would require extensive tracing technology, immunity testing, and hospital surge capacity, Harris argued. As a result, most of America won’t go back to work until a vaccine is introduced.

Unfortunately, we think there will still be a large number of workers not able to go back to work until a vaccine is abundantly available as social distancing cannot be fully relaxed until we have herd immunity (~60% of people vaccinated).

Neel Kashkaria, head of the Federal Reserve Bank of Minneapolis, struck a similarly downbeat tone over the weekend. He said, “baring some healthcare miracle,” America will remain in a state of on-off lockdowns for 18 months.

We could have these waves of flareups, controls, flareups and controls until we actually get a therapy or a vaccine.

Neel Kashkaria, head of the Federal Reserve Bank of Minneapolis

A quick V-shaped recovery, he argued, is difficult to imagine.

Last week’s record-breaking stock market rally was driven by the early slowdown in the coronavirus spread. As that rally begins to fade, investors will need a new catalyst.

Morgan Stanley’s Harris said that only a vaccine could trigger a full recovery, which may not come until 2021.

Investors cannot afford to lose sight of the fact that only a vaccine will provide a true solution to this pandemic.

Across the pond in Europe, countries will likely keep their borders closed for the rest of the year. French President Emmanuel Macron announced strict border controls until September. And European Commission president, Ursula von der Leyen urged people to forgo European travel until 2021. She also said that only a vaccine would compel her to loosen border restrictions.

I’d advise everyone to wait before making holiday plans. At the moment, no one can make reliable forecasts for July and August. We will need to learn to live with the virus for many months, probably until next year.

When Will A Covid-19 Vaccine Be Ready?

Harris was at least optimistic about the timeline for therapeutics and, ultimately, a vaccine. There are now 70 potential vaccines in development, and he urged the government to start funding mass manufacturing projects.

With therapeutics available in the near term and a vaccine on the horizon, the market could start to ‘look through’ the slow US recovery and back to pricing in future US growth.

Until then, the rest of America is bracing for a new rush of coronavirus cases. New York is three weeks ahead of the rest of the country, according to Harris. And the country’s total peak will lag China by four times due to the “slow uptake” of social distancing measures.

Meanwhile, Wall Street awaits the first batch of Q1 earnings reports this week. J.P. Morgan, Citigroup, Goldman Sachs, and Bank of America are among the first to report in the coming days.

Signs of Another Sell-off Are Mounting

According to Jim Cramer, over at TheStreet, Wall Street stocks have enjoyed an impressive bounce from their bear market lows, caused by the Coronavirus and recession. While it has become clear that earnings are heading lower and that stocks will have to reflect this, there’s a less talked about statistic that usually precedes more selling.

An improving credit market not is not an immediate sure-fire indicator of equity market strength, and in the last economic meltdown, it preceded more near-term selling.

The S&P 500 fell 34% from its all-time-high hit in February, then bounced 25% and out of bear market territory. Now, as the coronavirus spread decelerates globally and the Federal Reserve pumps trillions of dollars of liquidity into all sectors of the bond market, from member bank repo operations to the high yield market, many on Wall Street are calling for a near-term and meaningful pullback before we finally get that sustained bull market again.

The U.S. isn’t out of the woods on the virus. There is limited visibility on the sharpness of a recovery. The flow of new liquidity to all members of the economy remains a question mark in terms of speed and use of funds.

Meanwhile, company analysts have revised earnings estimates for 2020 down by 12%, compared to the S&P 500’s year-to-date loss of 14%. But strategists note that the earnings revisions could be as severe as negative 40%, as analysts have essentially updated models on a lag to reality. And that doesn’t even address distressed debt levels in some businesses and lowered earnings forecasts for 2021 and 2022.

One factor that has given stock investors solace is that, along with the Fed’s support of the carpet on market (investment grade and high yield), the iBoxx iShares High Yield Corporate Bond ETF (HYG) – Get Report from BlackRock has seen its share price rise 17% since March 23, the current 2020 low point in risk asset markets. In that time, the aggregate U.S. high yield credit spread has fallen from above 1,000 basis points (10%) to around 800 basis points. That means investors are willing to accept 8% more than the risk-free 10-year treasury bond, rather than the 10% demanded at the market’s recent bottom.

Importantly, after the S&P 500’s 5% gain last week, the market is losing steam Monday. The HYG share price was down 1.74% Monday, which was mostly risk-off.

This all sets up Canaccord Genuity’s Chief Market Strategist Tony Dwyer’s point: the solid price action of the noted high yield one ETF absolutely does not reflect positive forward sentiment in stocks.

Dwyer noted that, in light of Thursday’s 6.6% share price gain on the bond ETF, “The other two times the HYG saw greater than Friday’s 6.6% ramp [market was closed Friday] did not represent “the” low in the market.”

The point, which some on Wall Street are making Monday: be careful with stock in the near-term. The market may have to rip the band-aid off before the wound begins to heal for good.

Pay attention. Stop ignoring reality. No one should feel okay about this. Wake up. Wear a mask. Do your part and DO BETTER! #DemVoice1 #TrumpVirus 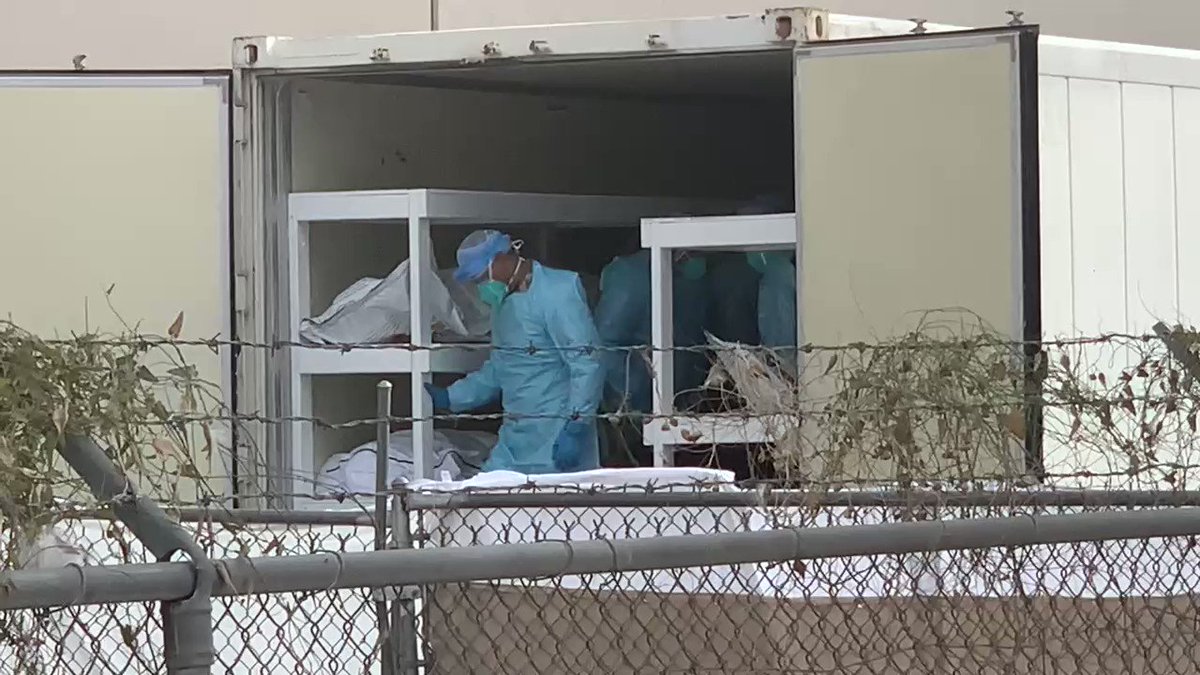 @tedcruz The National Guard is spending their Thanksgiving moving the dead bodies of innocent Americans lost to #COVID19 in Texas.

You need to pay attention to the people and stop playing politics, our family and friends lives are at stake.

There are no pending election lawsuits in Michgan.

I grew up in public housing. But my parents taught me that just because you live in poverty, doesn't mean you don't have dignity.

I’m running to make sure everyone has a fair shake in our economy.

OK just had to do it
#Trump #giventheFlick

Even the GOP rejects Trump’s plan to reopen schools